I was heading to Liberty Tree Tavern to enjoy a Patriot’s Platter, an All You Care to Eat meal, when I saw out of the corner of  my eye that Gaston was hanging outside his tavern.

Now, I was caring to eat a lot, but I knew it was a good opportunity to get Gaston’s answer to the hottest question of the season. Surely, I could pull off a quick little conversation with him. But before I had a chance to get a even single word out, he just started speaking.

In case you didn’t know, talking about Gaston is Gaston’s favorite and only way of saying hello. And I did know this, so it allowed me to cut to the chase and get the scoop. The trick is to not answer his question. Just change the subject to what you want to talk about.

“Hey, Gaston! It’s good to see you!” I declared boldly.

“Say, Buddy, what do you want for Christmas?”

I did it. I did it all in one breath. I was feeling pretty proud of myself, but then I realized this was Gaston. I had just asked Gaston to talk about Gaston. What had I done?

“I want a ring, but not just ANY ring,” lifting his fist with an over-dramatic predictability.

He then proceeded to drone on and on about how a ring from Belle is all he wanted for Christmas. That’s when it hit me. The rumors are true. The dude still thinks he’s got a chance with Belle! It’s like he’s living in his own Fantasy land, INSIDE OF FANTASYLAND!

I decided I had to make a quick exit. I was too hungry to stick around and laugh as much as the situation deserved. I admittedly made a rude interruption, “Okay, Gaston! It was good to see you again. Have a wonderful holiday!”

Before I knew it, I had a wonderful Pinot Noir and three kinds of meat in front of me. The stuffing and cranberry chutney were perfect additional touches. The service was as exceptional as the meal itself.

A good 90 minutes later, I left with a very full belly, and I swear I could still here Gaston lamenting about his perfection all the way from Liberty Square. 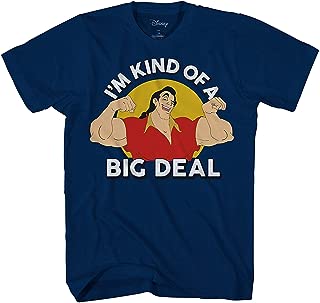 Dumbo isn’t just for kids. Join AllEars.net as they share their ride and some history about this popular ride in the Magic Kingdom.